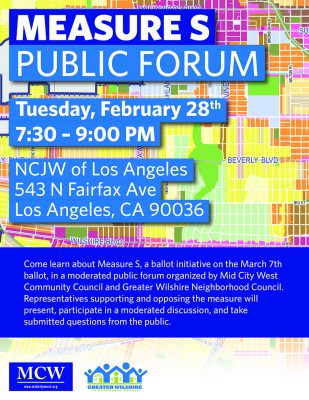 Learn about Measure S, an initiative on the March 7th ballot that could have wide-ranging effects on many types of development and housing in Los Angeles, in a moderated public forum organized by Mid City West Community Council and the Greater Wilshire Neighborhood Council. Representatives supporting and opposing the measure will present, participate in a moderated discussion, and take submitted questions from the public.

Moderator – Greg Goldin
Greg Goldin is an architectural historian specializing in the story of unbuilt urban and design schemes. He is the author of Never Built Los Angeles and its sequel Never Built New York. He has been a Los Angeles-based journalist for more than 30 years, covering local politics, urban affairs, and the environment.

No on S – Luke Klipp:
Luke Klipp is the President of the Los Feliz Neighborhood Council, and he spends his days crunching numbers for the LA Metro. At the neighborhood council, he’s also served on the Transportation and Planning committees. He and his husband own their Los Feliz home, where their two dogs run the show. 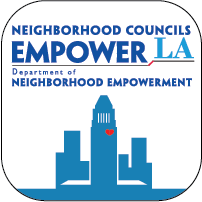